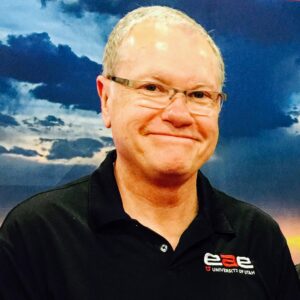 The University of Utah’s Entertainment Arts and Engineering Program’s co-founder and long-serving first Director, Bob Kessler, Ph.D, a professor of Computer Science, died at his home in Park City on the evening of July 7th, 2021 after a long, courageous battle with cancer.

Bob was one of the founders of EAE and led the program as its first Director for nine years. Previously he had served as the chair of the School of Computing, and was the founder of the Center for Software Science, a state of Utah Center of Excellence. He was a consummate mentor and teacher and was awarded both the University of Utah’s Distinguished Teaching Award in 2001, and the IEEE Computer Society’s Computer Science and Engineering Undergraduate Teaching Award in 2019. Through his work, he had a transformative impact on the dozens of staff and faculty that had the privilege to work for him, and thousands of students that learned from him. Bob’s love for teaching and for EAE students was obvious to everyone who knew him, as was the respect and love shown to him by the students that he inspired, many of whom freely admit that having Bob as their professor changed their lives and opened up careers for them.

Bob co-founded EAE along with two graduate students, Roger Altizer and Mark van Langeveld, who are now EAE faculty. At a time when there were only a handful of games programs on college campuses, Bob worked with his collaborators to pioneer a new model for games teaching and scholarship, and created EAE as a teaching program in 2010. “Bob was a friend, mentor, and role model,” said Roger Altizer, “he was about to start retirement when we started EAE. He decided to stay at the U, instead, because he saw the potential of games as an academic field, as well as the passion of his students and colleagues. Without Bob there would be no EAE. I’m not sure I’d be a professor without his support, and I know that the hundreds of game developers out there who studied under him would say the same about their careers. The U, EAE, it’s students, faculty, and staff all know that we owe so much of our happiness and success to Bob. Some shoes are hard to fill, his will be impossible to do so.”

A self-described nerd and proud engineer in every sense, Bob received all his degrees in Computer Science from the U (BS ‘74 magna cum laude, MS ‘77, Ph.D. ‘81) and joined the School of Computing as a Research Computer Scientist in 1982. In 1983 he became a Research Assistant Professor and was promoted to associate professor with tenure in Computer Science in 1990. He served as Director of the School of Computing from 1995 to 2000. He will be remembered as a professor who would rent an entire theater to take hundreds of students to see the new Star Wars movie and in the same day sit down with them to go over assignments or co-author research papers. 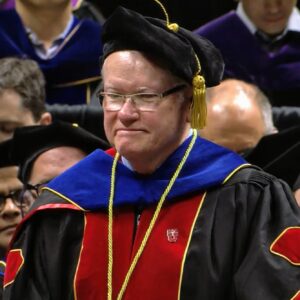 Bob was an early researcher in programming languages, making significant impact in the development and practical use of Portable Standard Lisp. He then shifted gears to become one of the very first to explore pair programming and its potential in software engineering. He supervised more than 10 Ph.D students who went on to become leaders in computer science in academia and industry. A more complete description of Bob’s work in the School of Computing can be found on the College of Engineering website.

He began his phased retirement in 2009, but true to his nature, he returned to full-time status to found EAE in 2010 and served as its Director until 2019. His insight and vision in creating EAE fixed the U as one of the world leaders in the discipline of Games. For his work, Bob received many recognitions and awards, including being named a University of Utah Presidential Scholar and receiving the University of Utah Distinguished Teaching Award, the College of Engineering Outstanding Teaching Award, and the IEEE Computer Society Undergraduate Teaching Award.

One of Bob’s enduring and remarkable contributions to the U is his careful and deliberate creation of the EAE family. Thousands of U students have learned the values of team-based, collaborative work that integrate knowledge and skills from computing, art, design and many other disciplines. Bob taught students, staff, and faculty alike that their work was not just about what they made, but the people they made it with and for. Bob demonstrated a deep sense of caring for the other, which was instilled in everyone he worked with.

Details have not yet been set for a memorial service for Bob. The Kessler family has asked that any donations for Bob be sent to the Kessler Family Scholarship:

This link points directly to the giving page for EAE. On this page, donors should use the special instructions field to designate the gift in memory of Bob, and meant for The Kessler Family Scholarship Fund.

To honor Bob’s many, many contributions to EAE and the University of Utah, the program will be naming its graduate student studio space in Building 72 after Bob. “Bob was an outstanding engineer and educator renowned for his deep care and passion for student success,” said Michael Young, Director of EAE. “His selfless leadership laid the groundwork for our achievement as a teaching program, our strength as a research enterprise, and our culture of diversity, respect and teamwork.” Young announced on Friday that the program will also be creating the Robert Kessler Teaching Award, which will be awarded annually to EAE’s top instructor.

We hold the memory of our dear friend and colleague in our hearts.