In 2017, EAE moved into the newly renovated first floor of Building 72, the former home of the SJ Quinney School of Law library.  In the summer of 2019, EAE expanded into the building’s full space to occupy the 32,000 square foot facility.  That same summer, major renovations began on the lower floor of the building,  a multi-million dollar phased expansion and renovation to transform the building into one of the leading academic games facilities in the nation.  The building contains a mix of research and teaching labs, multiple EAE classlabs, motion capture and games user research labs, esports and game streaming production spaces, and significant collaboration space for EAE students and faculty.  The space and facilities in Building 72 enable EAE to provide an unparalleled education and research experience to students and to engage in remarkable collaborations with partners across the campus, the nation, and the world. 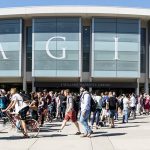 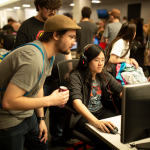 The EAE Master Game Studio is a large studio space providing the EAE graduate student cohorts 24/7 a home base for all their course work.  The studios 8,000 square foot, open space design supports student-led configuration of their work environment to support project and team dynamics across the game dev lifecycle.   Student workspaces are configured with high-end game development workstations, many with tablets and peripherals to support game content creation.  The space contains configurable lecture areas, writeable walls and media spaces and team rooms for focused collaborative work. 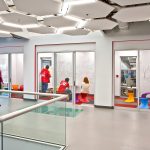 Collaboration is a critical component of all of EAE’s academic programs.  Our facilities support a wide range of collaborative activities, from team-based scrums to brainstorming to paper prototyping to highly interactive physical controller construction.  Our building holds five collaboration rooms schedulable by students ranging in capacity from 8 to 20 team members.  In addition, the building is designed to support informal collaborative activities in studio space, the LaLonde Student Lounge, and over 4,000 square feet of open flexible workspace throughout both floors of the building.

Two EAE-dedicated teaching classless, both over 750 square feet, are used exclusively by EAE for teaching graduate and undergraduate courses where faculty and students interact during class to explore arts and technology.  Both classless contain 40 NUC workstations running high-end graphics applications.  One classlab is also fitted with 40 accompanying 30″ Wacom Cintque display/tablets. 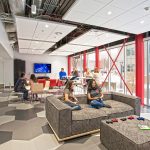 Made possible by a generous gift from John LaLonde, the LaLonde Student Lounge has kitchen facilities, couches and tables and two large gameplay stations for playtesting and recreation.  The lounge is regularly used for board game nights, esports viewing, and project milestone celebrations.

The Entertainment Arts and Engineering Motion Capture Lab is a state-of-the-art facility designed to capture human motion. Using this facility, students, faculty and their collaborators can capture custom animation from actors ranging from dance, athletics, combat, and martial arts to specific acting and character performances. These animations can be used for digital characters in games and other real-time virtual environments.  The facility allows its users to build new forms of educational projects and research environments not otherwise accessible or practical.  Students, faculty, and staff from EAE and across the campus make use of the facility for research and course projects.  The facility includes 8′ by 16′ motion capture performance space covered by 12 OptiTrack cameras.  The system is controlled by a high-end PC running OptiTrack Motive optical motion capture software.  The facility also holds a SUIT SPEC accessible for on-location motion capture outside of the Mo-Cap Lab.

The EAE Game Streaming Studio is a 550 square foot studio facility equipped with state-of-the-art equipment for streaming targeted at games streaming., including a news desk set and a talk show set, both equipped with studio-quality lighting, 4K cameras, and audio recording.  The faculty is directly adjacent to the Streaming Production Suite, a 400 square foot streaming production facility with stations for directors, editors, and observers to provide live production as well as offline editing of video content.

EAE’s VR and AR lab facility includes a range of room-scale mobile and fixed sensor VR and AR equipment.  Systems include Oculus Quest, HTC Vives, etc, and an advanced Collins Aerospace Coalescence AR environment.  The VR/AR lab was provisioned in part by a gift from Microsoft. 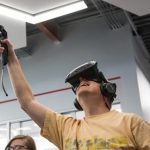 The Cafe Brio Coffee Bar located in the lower level of EAE’s Building 72 brings wonderful smells of coffee and snacks to EAE students and faculty throughout the academic year.  The coffee bar is open during the week, with hours that vary by day.  See the Cafe Brio website for more information.

Beyond Building 72: creativity Spaces in the Marriott Library 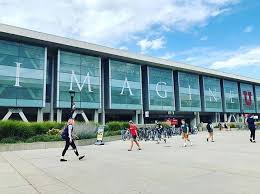 The Marriott Library Creative Spaces extend opportunities to engage and inspire creative minds using previously inaccessible technologies such as 3D printing, 3D scanning, Arduino and Raspberry Pi microcontrollers, Oculus Rift and HTC Vive virtual reality systems, and video games and gaming systems.  EAE students make use of the tools and spaces in the Marriott Library for a range of graduate and undergraduate projects.

Beyond Building 72: Audio studio in the Marriott Library 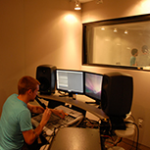 The Audio Studio in the Marriott houses a soundproof Studio with professional microphones and the capacity for creating, recording and editing digital soundfiles.  To learn more or to schedule a consultation, please visit the audio studio website.

Beyond Building 72: The make program in the lassonde studios 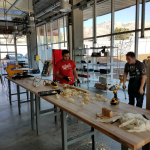 The Lassonde Studio’s Make Program helps students campus-wide to learn the safe and creative use of heavy duty tools and equipment for both wood and metal in their workshops and a range of 3D printers, vinyl cutters and laster cutters in their prototyping room.  The maker space is used by EAE students in contexts ranging from the creation of alternative game controllers to the 3D printing character model prototypes.

Beyond Building 72: 3d Printing across campus 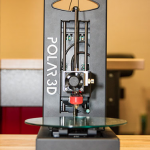 3D printing, useful for character and level modeling and prototyping of alternative controllers and other physical elements of game design, are available to EAE students in studios across campus, from the Center for Medical Innovation to the Marriott Library to the Lassonde Studio.  An overview of all 3D printing capabilities on campus is available here.