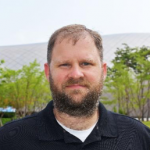 Gabriel Olson received his BS in Game Art and Design from the Art Institute of Portland in 2008 and his MFA in Entertainment Arts and Engineering from the University of Utah in 2013.  He got his first industry work in 2008 working as a modeling texture artist at Liquid Development and continued for the next eight years working in various industry positions for companies including 3d Central, Laika, Metaversatility, and Disney Interactive on projects for CodeMasters, Microsoft, Sony, General Mills, Nabisco, Mars, Ubisoft, and Disney. Published game titles include Damnation, Sony Home, Toy Story 3: The Video Game, Cars 2: The Video Game, Disney Infinity, Disney Infinity 2.0, and Disney Infinity 3.0.  He began his teaching career at Mt. Hood Community College in 2009 where he was instrumental in developing and teaching game arts curriculum. He taught 3d modeling at the Art Institute of Salt Lake City in 2011 prior to teaching at the University of Utah as an Associate Instructor from 2011-2016. Currently, Gabriel is an Assistant Professor/Lecturer at the University of Utah. He also advises the Producer and Artist Tracks for the Entertainment Arts and Engineering Master Games Studio program. He serves as the Interim Director for the ​Therapeutic Games and Apps Lab (The GApp Lab)​ for the year of 2019.