This Spring and Summer terms, EAE will be hosting Michael Debus, as a visiting scholar working with Professor José Zagal. Debus, a doctoral student researcher from IT University Copenhagen, works on the development of ontologies for game elements: frameworks for describing, analyzing and studying games. During his visit, Debus will be collaborating with Zagal to […]

This March, EAE Assistant Professor Ashley Brown traveled to San Francisco where she helped organize and run the US Games User Research Summit. An annual gathering for researchers and practitioners working in games user research (GUR), the Summit provides opportunities for GUR experts to share best practices, network, and to engage with junior colleagues. Brown […]

How Can Stories Be Used to Help Cyber-Security Experts?

Professor R. Michael Young, deputy director of EAE and professor of computer science at the University of Utah, has been awarded $124,856 by Charles River Associates as part of a larger grant from the US Intelligence Advanced Research Projects Agency (IARPA) to support his research proposal entitled “PSyCHIC: Predictive System for Cyber Hostility using Integrated […]

Dr. Michael Young, deputy director of EAE and professor of computer science at University of Utah, and Dr. Mark van Langeveld, associate professor of EAE, have received a gift of $25,000 from Rockwell-Collins’s University/College Grants program in support of their research efforts around a project entitled “Developing Intelligent, Adaptive Systems for Personalized Training in Augmented […]

The U.S. intelligence community relies on anticipatory thinking, visualizing what might happen based on relevant known facts, to provide critical insight during the intelligence analysis process. Providing a diverse collection of training examples — stories where imagined bad actors form and pursue potentially nefarious goals — is both knowledge-intensive and time-consuming. However, systems to produce […] 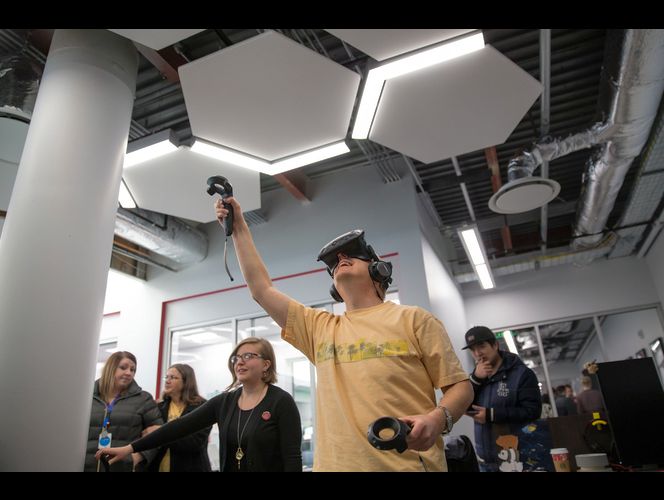 Bored, Stressed Or Feeling Blue? There’s An App For That At The U.

By Daphne Chen | Posted Dec 11th, 2016 @ 9:18am SALT LAKE CITY — Outside, the room is hot, the crowd is buzzing and the DJ is bumping. But inside 6-year-old Tarrah’s head, the sweet tones of classical music are piping through her ears as she conducts a school of fish around an underwater shipwreck. […]

Prescription To Play: U Working To Improve Your Health With Apps, Games

By Peter Rosen | Posted Mar 17th, 2017 @ 7:03pm SALT LAKE CITY — How do you get a newly diagnosed diabetic to take his or her blood sugar level seriously? Perhaps, by turning that data into a mountain range. “A lot of the medical information that we get is abstracted, that it’s information about […]

By Lassonde Staff March 14, 2017 For the fall 2016 semester, Kun Cheng, an Entertainment Arts and Engineering (EAE) graduate student, was the lead engineer developing a virtual reality video game for students with autism through the Therapeutic Games & Apps Lab (or Gapp Lab). Given the framework provided by University of Utah dance instructor […]